better picture of mysterious fly
Can you help identify this fly?
I have a fly in my home with bright yellow stripes across it’s back like a yellow jacket it also has a stinger attached to her rear end I took some pictures of it with the digital camera. Or at least I believe she is a fly, she has the head and wings of the other three house flies in the house just not the same body. Not the best but I can take more she’s just been sitting there looking at me all day in the exact same spot. I don’t know if this is of interest to you or not but three regular house flies that flew in with her, two as you can see from one of the pictures I have attached keep attacking her head. The other one I think was breeding with her. Can you help identify this one? For now since I am not sure what she is I’m just leaving her alone. Besides she’s been so patient with me trying to get a good picture of her shes just sat there and posed. Seems to be as fascinated with me as I am with her. If you need more pictures i can try and get more maybe use a chair if she is still here. When my husband got home last night he said he had seen one before but doesn’t know what it is. she’s back sitting in the exact same spot almost not moving again. I think that’s strange behavior for a fly. My husband also said they look like flies but he believes they are some sort of bee. I don’t think I told you where I live either it’s Riverside, CA. Also she is just a little over half the size to 3/4 the size of the house flies that will not leave her alone.
Thanks! Diana 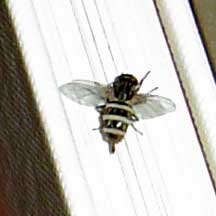 Hi Diana,
Your photo is of a Hover Fly from the Family Syrphidae. They are called Hover Flies because of the way they can hover in the air above flowers. They are sometimes called Flower Flies because they eat nectar from flowers. Their coloration which mimics bees and wasps is thought to be protective. Your fly is harmless and will not sting you.