Subject: cicada killer wasp??
Location: Mason, MI
September 6, 2014 8:35 pm
This is the 2nd time I’ve seen this insect–both times I was inside my car. The first time I was driving when my son noticed it on the windshield and it stayed put until my speed reached about 50-55 mph. This one landed on my car when I reached my destination and I hadn’t gotten out yet. So I took a picture so I could try to identify it later. It’s at least 1 inch or bigger and I thought the first one looked like it had striped-like markings of a wasp but this one doesn’t appear to have those as much but it could be the angle of the picture. A friend thought it might be a cicada killer wasp but I wasn’t as convinced.
Signature: Sandra 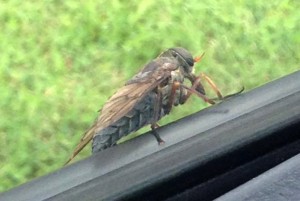 Dear Sandra,
This is a Horse Fly, not a Cicada Killer.