Subject: Assassin Bug or Spider?
Location: Palm Desert, CA
April 7, 2017 10:02 pm
Hi Bugman,
This morning I encountered scores of what I thought were spiders were all over the shear rock slope, off a hiking trail in Palm Desert.
The body was about an inch long, the legs were striped and really long. The front legs seemed to be about 4″ or more long and extended way out in front. They were really well camouflaged on the rocks. I was taking photos of one with my phone and soon realized they were everywhere in a 100′ length on the upslope side of the trail. Two seemed to crawl into a small crevice when a 2″ black beetle started climbing up the rock about a foot away. The 2 bugs disappeared into the rock and the beetle never made up the steep rock wall.
All of the mystery bugs were about the same size. Maybe it’s mating season?
It was overcast around 9 AM. and this would’ve been the shady side of the hill. The trail has about 45° grade. I’ve not seen these bugs before. I included wide shot of the rock wall. There is at least 1 in the wide shot.
Reading about assassin bugs makes be glad I didn’t get to close…
Signature: Hiking the Desert 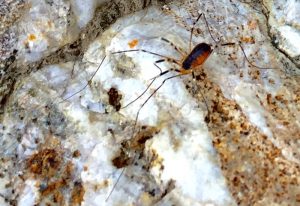 Dear Hiking in the Desert,
These are not Assassin Bugs, nor are they Spiders.  They are Harvestmen in the order Opiliones, and they do bear a resemblance to Spiders because like Spiders, they are members of the Arachnid class.  Unlike Spiders, they are not venomous, hence they pose no danger to humans.  Finding them on the shady side of the trail makes sense.  According to BugGuide:  “In some cases, in dry climates, they gather in large numbers during the day, probably to avoid dessication, and wander about in search of food after the sun goes down.” 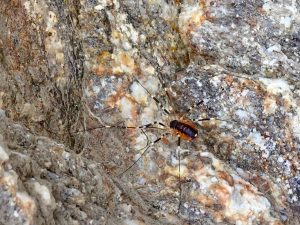 Update courtesy of Diane
Diane who submitted the images just sent us a BugGuide link to the Desert Harvestman, genus Eurybunus, which sure looks like her individuals.  According to BugGuide:  “Adults found in winter and Spring.”