Subject: Yellow and black beatle ID
Location: Trinidad, south of the Caribbean
August 17, 2015 2:16 pm
I have found this beatle dry and dead on the deck of the vessel I am working on. We are at anchor offshore Chaguaramas, Trinidad. Would like to know which species is. I live in Europe so I am not used to tropical beatles. I have try in many webpages to identified but to not avail.
Many thanks
Regards
Signature: To Antonio 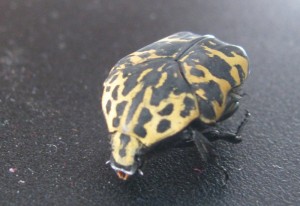 Dear Antonio,
Your beetle bears such a striking resemblance to the North American Harlequin Flower Beetle, Gymnetis caseyi, that we were certain your individual from Trinidad is either the same species, a subspecies or a different species within the genus.  According to BugGuide:  “Ratcliffe determined 18 spp. within Gymnetis, but only G. caseyi reaches the U.S.”  Zipcode Zoo lists numerous species and subspecies, and at least one, Gymnetis bajula banghaasi, is found in Trinidad and Tobago.