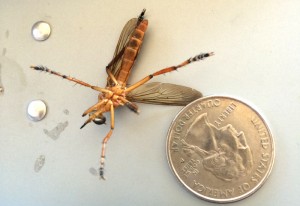 What killed the Hanging Thief???

Subject: large Mosquioto like thing
Location: Mobile Bay, Mobile, AL
October 10, 2014 10:59 am
Do you have any idea what this guy is? I would hate for it to bite me.
Signature: tonyh

Hi Tonyh,
This is a predatory Robber Fly in the genus Diogmites, and members of the genus are commonly called Hanging Thieves.  We personally think that Hanging Thieves look much better living than dead.  Hanging Thieves are adept predators that take prey on the wing, and they often feed on large stinging insects like wasps.  Though we would not discount the possibility of being bitten by a Hanging Thief, we have never received any reports of such a bite and from all we have read, Hanging Thieves are not interested in biting humans.  Because it appears that this Hanging Thief has met with an unnatural end at human hands, we are tagging this posting as Unnecessary Carnage and we hope that should you encounter a Hanging Thief again in the future, that it be allowed to fly off to live a full life preying on other flying insects.

Thank you for the reply.  This guy managed to get into the bar at the local yacht club and a frightened member read a page of the local news paper to him.  Too bad since he is a predator of the bugs that pester us the most down on the water.  I will post the info from below to the yacht club web site in hopes of educating the membership and saving the next hanging Thief we encounter.
Thank you again for the info.
Tony Hines.
here is a link to the post on FB.  We will try to do better next time:
https://www.facebook.com/groups/48034636865/

Robber Fly, killed with a shoe out of fear