Subject: It’s an ALIEN INSECT!
Location: Indianapolis indiana
August 8, 2014 3:13 pm
What in the HAIL is this insect? It was on my sweet corn. We live in Indiana. Thank you!
Signature: Bugs, 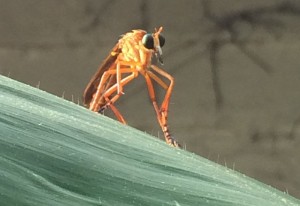 There is nothing alien about this magnificent, predatory Robber Fly in the genus Diogmites, commonly called a Hanging Thief.  It is a native genus.  This individual appears to be waiting to ambush some large flying prey, often bees or wasps.  The common name Hanging Thief is derived from the manner in which the predator hangs from a single leg while feeding on its captured prey.

OMG! How COOL! Haha thank you. It was really terrifying because it would turn it’s head to look in my direction when I would talk.
I am a collector of praying mantids. And it was really interesting to me that this insect was able to turn his head like that. I thought I read somewhere that only praying mantids were capable of doing this. Do you know what I’m talking about? Thank you so so much! Very cool insect to have around in my garden!
Thanks again!

Today was quite the day for large Robber Flies.  We have four new postings, including another Hanging Thief and two Red Footed Cannibalflies.

Haha. How funny!
So what is it called when an insect can move it’s head/neck joint around like this one and praying mantids do?

Hmmm.  Flexible perhaps?  According to National Geographic on mantids:  “They have triangular heads poised on a long ‘neck,’ or elongated thorax. Mantids can turn their heads 180 degrees to scan their surroundings with two large compound eyes and three other simple eyes located between them.”  No special adjective is used to describe the flexibility.  According to Featured Creatures:  “Robber flies are opportunistic predators, their diets often reflecting prey availability in a particular habitat. Shelly (1986) reported that of the nine Neotropical Asilidae species he studied, diet constituents were more than 85% composed of insects from the orders Diptera, Coleoptera, Hymenoptera, Homoptera, and Lepidoptera. Furthermore, larger species tended to consume a greater diversity of prey taxa. Robber flies generally establish a perching zone in which to locate potential prey. Perching height varies by species, but generally occurs in open, sunny locations. Asilidae seize their prey in flight and inject their victims with saliva containing neurotoxic and proteolytic enzymes. This injection, inflicted by their modified mouthparts (hypotharynx), rapidly immobilizes prey and digests bodily contents. The robber fly soon has access to a liquid meal, which is generally consumed upon returning to a perched position.”  No mention is made of head rotation.  We had better luck on the Asilidae Homepage Information on Robber Flies Morphology where multiple experts are quoted.  According to Lehr (1988): “Head flattened, transversely rounded or slightly oblong, mobile” and according to Majer (1997):  “Head is relatively short and broad with more or less convex occiput, freely moveable.”  To there you have it.  According to the experts, the head is either “mobile” or “freely moveable.”  P.S.  We also just posted an image of mating Red Footed Cannibalflies which brings to total Robber Fly postings today to five.