Strange Creature
My husband found this strange creature crawling on our truck under an oak tree. Is it some kind of larva camouflaged as a leaf? It was almost slug-like on its underside (but didn’t seem to be leaving a slimy trail) and had a very strong suction hold to the glass jar I had put it in. It was about 3/4″ in length. The “leaf” part appeared to be very soft/velvety. We live in SE Virginia. Can you help us identify this?
Thanks,
Michele 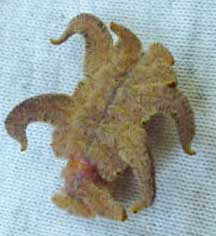 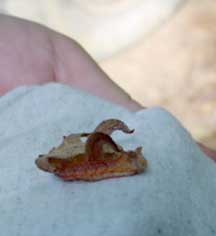 Dear Michelle,
Sometimes called the monkey slug, the full-grown hag moth (Phobetron pithecium) caterpillar is brown, 0.5 inch long, and has nine lateral lobes or processes with urticating (stinging) hairs. Some of these lobes protruding from the sides of the body are longer than others and are occasionally shed. Hag moths caterpillars are present in summer and fall. They produce one generation per year. Host plants include various forest trees and shrubs.
“Phobetron pithecium is called the Hag Moth because the dark brown larva has eight relatively long, fleshy, hairy appendages that cover the back, project from the sides and have a backward twist like locks of disheveled hair. They are, in fact, fleshy hooks covered with feathery, brown hairs among which are longer, black, stinging hairs. the cocoon is almost spherical and is defended by the hairy appendages that the larva in some way contrives to leave on the outside. These tufts give to the bullet-shaped cocoon a nondescript appearance and the stinging hairs afford a very perfect protection against birds and other vertebrates. The adults fly in midsummer. The female is brownish marked with yellow; the male is smaller.” according to Lutz.
Here is a great site with more information on stinging caterpillars.