Subject: green salt water beetle
Location: Strait of Juan de Fuca – Dungeness Spit
June 26, 2012 4:27 pm
We saw this bug under some rocks and it seemed unusual to us because we have never seen it in our area before. There were several colors ranging from the bright green to almost black.
Signature: Zak 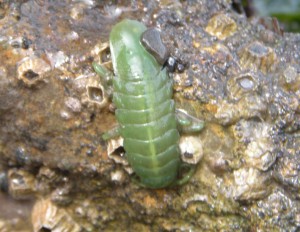 Hi Zak,
This is a type of Crustacean known as an Isopod and there are Isopods that are found on land as well as the marine variety.  Our favorite bit of information we learned upon doing additional research on your request is the common name Gribble on the E-Energy Market website which states:  “Once the scourge of the seven seas because of their appetite for wooden sailing ships, gribbles could hold the secret to turning wood into biofuels. British researchers say the enzymes in the guts of the tiny marine isopods could lead to a chemical process that can covert woody plant fibres into usable fuel.”  We continued to search and found the Feeding at Eagle Cove website that identified this green Isopod as Idotea wosnesenskii.  The Racerocks website of Pearson College has a wonderful page of information including:  “You can find it under rocks, under cobble at the edges of tide pools, in blades of seaweed, attached to floats and on eelgrass. Hangs onto holdfasts stalks, worm tubes and other objects. But the most common place is under rocks on the shore.”