big beetle bug
Hey.
We live near Raleigh, NC and are having a horrible time getting rid of some bugs that have attacked our newly planted (last fall) River Birch Tree. They have attacked only one of the 3 trunks of the tree which is now pretty much black and looks like it has been burned up. As you can see in the close up photo of the bottom of the tree, there are 2 types of bugs – one we know is a typical “June Bug”. The larger one favors the June Bug, but is twice the size. We have tried normal ways of trying to rid ourselves of them – which has worked on the June Bug, but not the larger one. We have used Sevin Spray and the Bag – A Bug. The Bag – A – Bug doesn’t even draw them and the spray only kills the one’s that are on the tree at the time. The next day, more are present – many more!!! They come by the 100’s. They are now moving onto my tomato plants – so it is time to get serious!!! Any idea what we are dealing with???
Going nuts!
Jim & Judy in NC 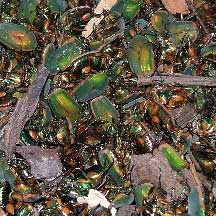 Hi Jim and Judy,
In addition to the smaller June Beetles, Phyllophaga species, you also have Green June Beetles, Cotinus nitida. These beetles are often called Figeaters, since they love to eat fruit. Adults fly in large numbers, making a loud buzzing which is somewhat similar to the buzzing of bumblebees. The beetle feeds on many plants, eating roots, stems and leaves. Larvae are common in rich soil and manure. We suspect that when you planted the tree, you amended the soil with organic material which served as a perfect habitat for the larvae. I would strongly suggest you check with a local nursery for a control method.

NOT Carrot Beetle but Ox Beetle