Large Orange-Black Carrion Fly in Singapore
Location: Singapore (southwest)
August 4, 2011 5:36 am
Hello bugman !
I saw several of these large, black & bright orange, wasp-like flies feeding on a dead frog in a dried-out ditch. The orange coloration covers half of the insect’s abdomen. I’m thinking that it resembles some kind of Mydas sp. — except that there is so much orange, & the abdomen is broader (more bee-like).
* Date: 21 July 2011 (around 5:50pm)
* Ambient Temperature: 29-30 deg C
* Season: Year-round Summer
* Weather: Hot & sunny during the past few days
…  A few days later, I spotted several individuals of the same type of fly again amongst some grasses at a reservoir, although I didn’t see any carrion nearby. May I know the ID of the said fly ? Thanks !
Signature: pyjstein 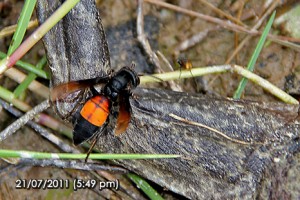 Dear pyjstein,
This is not a fly.  The reason it resembles a wasp is that it is the Greater Banded Hornet, Vespa tropica, which according to the Clubsnap Forum on Wasps webpage we found, is:  “one of the biggest and more common hornets in Singapore. This species is a predator on nests of other social wasps and bees. In fact, I believe that if you leave that nest alone, it is only a matter of time before these hornets attack and wipe the colony out, driving the adults away and capturing all larvae and pupae to feed their own offspring. A colony of these hornets in tropical areas like Singapore may well have to attack 500 or more colonies of paper wasps or honeybees throughout its lifespan!”  The site also contains these tips on photographing Wasps and Hornets:  “Three actions are most threatening to wasps and a sure way of getting stung: Approaching the nest too closely (every species has a different tolerance radius, and the wasps you photographed will tolerate approach with a mere inch of the nest), fast and sudden movement and breathing or blowing on the nest. As long as these are avoided, you’ll be fine around wasps.”  The abdomen on your specimen contains two orange segments, while all of the individuals on this Vespa tropica webpage have only one orange band.  We suspect this is merely color variation within a species and that it is not indicative of being a different species. 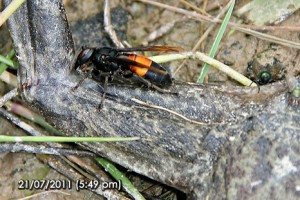 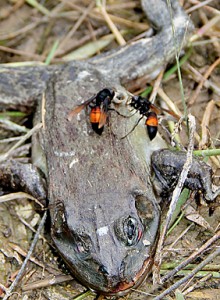