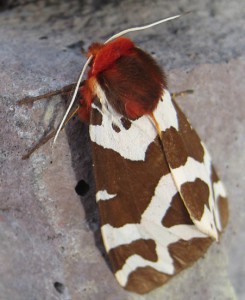 Hi Toby,
We don’t get many photos of the Great Tiger Moth, Arctia caja, which is known as the Garden Tiger Moth in Europe.  This is a species that might need conservation since according to BugGuide it is:  “uncommon to rare in North America; European numbers have been declining in recent years”  BugGuide also indicates:  “This species, formerly common throughout the UK, has steadily declined over the past 20 years, with numbers falling by around 30%. There has been a general movement away from the south and toward the north, with climate change believed to be a contributing factor. Warm, wet winters and warm springs are followed by a decrease in the number of tiger moths the following summer (Conrad et al, 2002).  Arctia caja was a favourite with early European collectors, who selectively bred it to create unusual colours and forms.”

Plume Moth from the UK