What is this bug?
I have hordes of this bug nesting in my patio which is made of stone blocks. They are going in the cracks and are huge! They never bother us but I am concerned that they could be destructive in some way. I have seen them taking green “grasshoppers” in with them. Sometimes they hover over the cracks between the patio tiles and then lower themselves into the ground. The one in the picture is about 1.25” long but I have seen smaller ones also. I forgot to tell you I live in Michigan and we have been seeing this bug for a good month or two. My dog keeps chasing them and occasionally catches one. They don’t seem to try and go after him when he antagonizes them. If it is a common flying insect, is there some kind of "bug killer" that won’t be harmful to my dog?
Thanks in advance,
Sherry Obershea 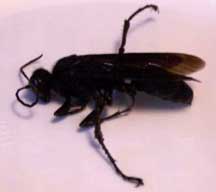 Hi Sherry,
You killed Sphex pennsylvanica, the Great Black Wasp. They are hunters of katydids, and they nest singly in burrows in the soil, not in mud nests. They are very non-aggressive. They are actually beneficial in keeping the destructive insect population down. You should learn to coexist.