CA large grasshopper
We live in Los Angeles, CA. My husband caught this grasshopper for our boys to look at in September. We got more than we bargained for as it layed eggs the first night. Six weeks later they ALL hatched. I’ve been trying to figure out what kind of grasshopper it is, but haven’t found an exact match. I’ve attached a photo of the mother who was close to 4 inches long, as well as the egg sac, and nyphs.
Jenny

Hi Jenny,
What a wonderful letter. We generally try to scan letters that come in on a given day before deciding what to post, but on occasion, there is a letter so special that we just immediately post it. Your grasshopper is a Gray Bird Grasshopper, Schistocerca nitens, a common species in the Los Angeles area. According to Charles Hogue in Insects of the Los Angeles Basin, the adults are generally found in the spring. The large female Gray Bird Grasshoppers are about twice as large as the males. The nymphs are bright green. Both nymphs and adults feed on the leaves of crops and ornamental garden plants. 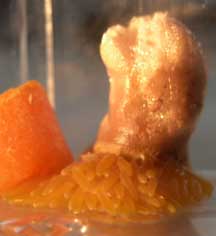 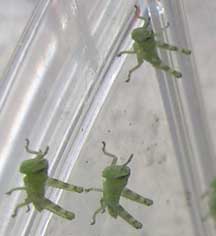