What’s going on here?
July 18, 2009
I came across this poor black beetle dragging itself across the rocks on a river shore in north-central Alberta. It was not very energetic to say the least and appeared to be ‘carrying’ something quite dead. I poked gently for signs of life, but barely spurred the black fellow to move. There was no reaction from the other one.
I did let nature take its course after taking this photo, and must say that the picture seems to show that there was more than ‘carrying’ going on. Was the ‘eater’ killed by the ‘eaten’, but too late? I admit I am a little sickened, but so very curious as to the possible scenario here.
I thank you in advance for any information you might be able to give me.
Just learning.
Swan Hills, Alberta 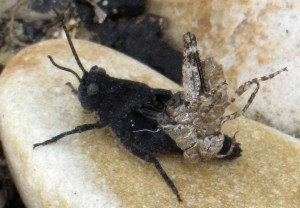 Dear Just learning,
Though this may look like a macabre scene, the Short Horned Grasshopper in the family Acrididae is actually just molting.  It is still immature.  We cannot tell you the genus or species, but the action depicted is a common occurrence, happening five times in the life of every grasshopper that achieves maturity.