IS IT A PAINTED GRASSHOPPER
October 8, 2009
I saw this insect sitting on the leaf of
Milkweek Plant. This area is a part of
Buffer area of SGNP forest. Since it’s
eyecatching i took two to three Pics.
HARI IYER
THANE, MAHARASHTRA, INDIA.

Hi HARI IYER,
Since you found this grasshopper on milkweed, we wonder if perhaps it might be one of the Toxic Milkweed Grasshoppers in the family Pyromorphidae.  Sadly, we have decided we need to go to sleep for the night, and our brief internet search did not reveal a species name for your lovely grasshopper.  Perhaps one of our readers will provide an answer for us. 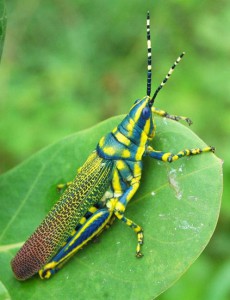 Update:  Thanks to Karl for the comment with the identification.  The link provided the following information:
“Poekilocerus pictus belonging to Family Pyrogomorphinae (known for cryptic as well as bright colours hence called Gaudy Grasshoppers are also known for “Spear” shaped heads) is commonly known as Ak Grasshopper (and one of the many Painted Grasshoppers), and is one of the most colorful grasshoppers of India. The nymphs display spots of varied colours from yellow, orange to blue and green. The adults show yellow and blue striped on head and thorax, a bright red abdomen, green-yellow forewings and red hind wings which are seen only in flight. The adults grow to about 60mm and are capable of good flight.
The adults are generally seen post-monsoon and, if conditions are favorable, they swarm. The food plant for this is Calotropis sp., especially C. procera, however it is known to attack many crops (including C. gigantea – Giant Milkweed). The color in nymphs as well as adults is bright and warning and is explained due to the presence of toxic alkaloids present in Calotropis they feed on.
The eggs are laid in “pods” (each pod contains 70 – 200 eggs) during the monsoon months June to August, and the nymphs hatch around September. The nymphs are usually seen near Calotropis plants, and by October the adults are seen specifically on the food plant. I have no records of finding it in the months after monsoon, however literature says that eggs laid in the month of September to November that hatch in April – May, here the incubation period is longer than during monsoon months due to, perhaps, climatic conditions.
According to literature, the adults are also known to turn cannibalistic even in the presence of ample food – for reasons unknown!”