Subject: GoldSmith beetle
Location: Central sask/Alberta
July 14, 2015 8:29 pm
My son B. Kolke sent me this photo he took today of a beetle, and he wondered what it was.
As I have had so much information and ID luck from this site, I came to look for it here. It was easy to find an ID but I thought that the bug itself was way out of it’s known range.
My son took this photo on the border between Alberta and Saskatchewan
Signature: T Kolke 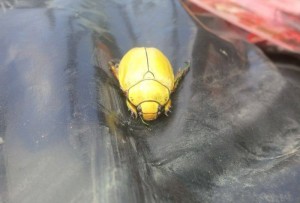 Dear T Kolke,
We agree with both your identification and your assessment that this Goldsmith Beetle, Cotalpa lanigera, is out of its reported range, at least based on BugGuide sightings, though Goldsmith Beetles have been reported from Ontario, Canada as well as North Dakota.  The Generic Guide to New World Scarab Beetles states:  “Cotalpa occurs from Maine to the Carolinas west to Louisiana and Texas, south to Sonora, Mexico and north to Saskatchewan, Canada (Saylor 1940; Young 2002).”  Nature Serve also lists a Saskatchewan sighting.  So, while this sighting is unusual, it is not unique.  Additionally, BugGuide states:  “Usually listed as uncommon” so any sighting where ever it occurs is noteworthy.

Wow that was a speedy response!  Thanks so much for that info!  We were so amazed to see something like that  never having seen one in our lives before. Cool and thanks for the links!
T Kolke