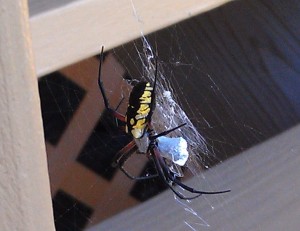 Dear EJF,
Thanks for sending us your photo of this handsome female Golden Orbweaver, Argiope aurantia, guarding her egg sac.  The Golden Orbweaver is a harmless species, though like many spiders, it is possible that they might be provoked into biting through careless handling.  Now that autumn has arrived and Orbweavers are reaching maturity, we expect to get numerous identification requests.

I was not 100% on it, but thought I was right. Lol. Anyway, I thought you guys would like that pic. Glad you did like it. Preston.