Location:  Roanoke Virginia
August 29, 2011
Daniel,
My Cicada pic made it onto the local CBS news! Thanks for publishing it as that is how the reporter found it!
I now have some pics of a beautiful Garden spider. So huge and intimidating. He has a cicada all wrapped up for later. 🙂
And could “crop 1 Garden Spider 011” be her mate? He was WAY smaller but I know males often are. He was in the same web.
Best wishes!
Paul Mays
aka neanderpaul 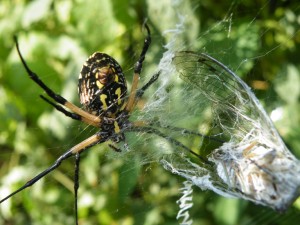 Hi Paul,
Thanks for the update and the great news about your previous photo.  We will be creating a new posting for your Golden Orbweaver images. 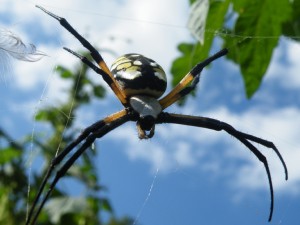 While both of your spiders are Orbweavers, the large female Golden Orbweaver, Argiope aurantia, is a different species than the smaller spider which we believe is an Orchard Spider,Leucauge venusta. 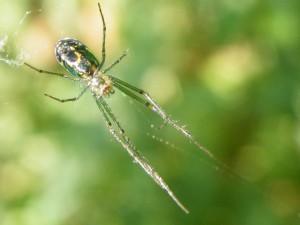