Iridiscent Green, copper belly beatle bug
Hello, Congrats on a Fascinatng and Useful Site!
Attached are 2 shots: top & belly view of most beautiful beatle type bug, iridescent green on top and copper underneath. Discovered under my T-shirt against my skin when I felt a slight prickle. Knowing it had to be a live critter, I ran up from crew quarters on our yacht where I had just been sorting through some unopened wine stores, and asked my husband to please remove whatever had just nibbled at me. I was afraid if I looked before it was removed, I might just lose my composure. We were about 10 minutes from casting off. I don’t know if I brought the bug on board or if it had been lurking in the stateroom waiting for transportation. We live in a condo in downtown Vancouver, BC, and our boat has never been more than 30 miles from its slip near us since we brought it from Florida 2 years ago. I’ve never seen a bug like this. As you can see from the photos, it is quite spectacular. My husband wrapped it in a tissue, flattened the poor thing to put it out of its misery, but evidently he didn’t quite do the dastardly deed because when we opened its shroud a day later, we saw it had tried to chew its way out and the tissue had a few large holes. From the belly shot, you can see its poor little legs all folded tidily after its futile struggle. What is it? Thank you from the Pacific Northwest.
Mary Ann 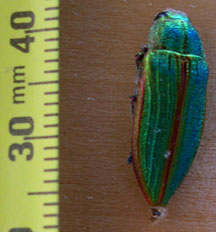 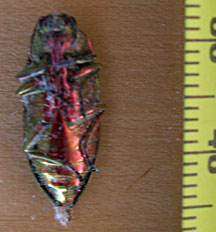 Hi Mary Ann,
Your Wood Boring Buprestid Beetle is gorgeous. This Family is much prized by collectors. We checked with Eric Eaton to see if he could identify the species. Here is his speedy response: “Pretty sure it is the Golden Buprestid, Cypriacis aurulenta (formerly Buprestis aurulenta). The lighting must be bad. Usually they have a bright copper border around each wing cover. Other possibility is Buprestis adjecta, nearly identical, but usually the raised ridges on the wing covers are closer together and more numerous. Larvae of both bore in dead and dying conifers. Sometimes a golden buprestid larva will get trapped in milled lumber and continue boring for decades (record is 51 years) before emerging as an adult! Who knows why. Eric”