Subject: Beetle
Location: Portland, Oregon
February 19, 2017 5:13 pm
I found this beetle indoors today. I think it is a Golden Buprestid Beetle. I want to know if it is a good bug or a bad bug.
Signature: Lois Biz 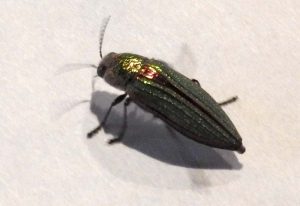 Dear Lois,
We agree that this is a Golden Buprestid, but when it comes to insects, “good” and “bad” are such relative terms.  Since the native range of the Golden Buprestid includes Oregon, this is a native species for you and native species occupy a place in the food chain as well as in the complicated, interconnected web of life in an ecosystem that we feel compelled to maintain that all native species are good in the overall scheme of things.  Introduced species can throw off the balance of life in a geographic region to which they have been introduced if they have no natural enemies to help control their populations, so we often consider introduced species to be problematic in their new homes, a consideration that lead to the creation of the Invasive Exotics tag on our site many years ago.  According to the genus page on BugGuide:  “Larvae feed on wood of various conifers and deciduous trees, incl. Fagus (Beech), Populus (Cottonwood), Acer (Maple), and Quercus (Oak).”  It is our understanding that native Metallic Borer Beetles are never plentiful enough in their native surroundings to do significant damage to healthy trees, unlike the related and introduced Emerald Ash Borer that has decimated populations of Ash trees in eastern North America.  As a point of interest, Golden Buprestids have been known to emerge many years after lumber has been milled.  Seems milling the lumber slows the maturation process, but the larvae are able to survive and continue to feed on the dead wood.