What is this Bug?
September 14, 2009
Dear Bugman, I have this most unusual bug in my downstairs (under the stairs bathroom). I apologise for the Quality of the pictures but it is so hard to get a picture of this bug as it is so tiny. You can see the scale from the last picture with the tap in it.
They seem almost transparent with a brown twinge and I only ever see one or 2 at a time. Usually on the sink or toilet but I have also seen them on the wall. The bathroom is small, quite cold usually and doesnt get a lot of light.
They move very slowly and seem a but unaware of my presence most of the time. They aren’t causing me any problem, more just curious as to what they are?
Thanks for your Help,
Regards,
Denis.
Dublin, Ireland 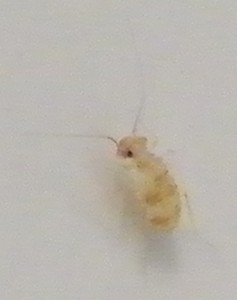 Hi Denis,
This is a Globular Springtail in the order Symphypleona and the class Collembola.  Springtails are primitive insects that are among the most numerous insects on our planet.  They are often associated with dark damp areas.  When they are very numerous, they can become an annoyance in the shower and other indoor areas, but they are benign.  They are thought to feed on molds, so a population explosion of Springtails may be symptomatic of a greater problem.

Correction by Eric Eaton
September 16, 2009
Daniel:
I think that “globular springtail” of September 14 is actually a wingless barklouse (order Psocoptera).  The two look extremely similar and I even have trouble telling them apart sometimes.  Still, I’d bet on this being a barklouse/booklouse.
Eric

3 Responses to Barklouse, not Globular Springtail