On July 7, 2011 · Category: Butterflies and Skippers Tagged With: mysteries · 3 Comments

Giant white winged butterfly?
Location: Auburn, NJ
July 7, 2011 8:48 am
Hi, I know the pics aren’t much, but I’m way curious with this one. This has got to be the biggest winged insect I’ve seen here. Unfortunately, it was at least 100 yards away from where I stood on the bridge over Oldmans Creek, near Auburn NJ. My eyes picked up on something white, and honestly, until I zoomed in with the camera expected it would be some sort of marsh bird. Or a flower or leaf or something large like that.
Only thing I can think of comes close to this size might be a luna moth. But this one is floating on a reed in the creek shallows, with it’s wings up. I thought moths usually rest with their wings down. I tried to adjust the settings hoping for some more detail, but it took off.
I’ll keep looking for it down there, and in the guides, but maybe it was just passing through? Thanks for any help.
Signature: Val 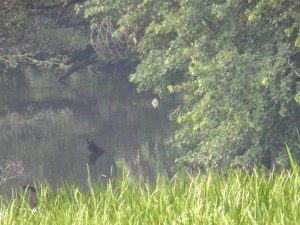 Hi Val,
While a picture might be worth a thousand words, there are times that a photo doesn’t quite capture the experience of actually seeing something.  Our eyes frequently play tricks on us, and photographs have the capacity to distort reality because of the compression of space and the way that perspective and depth perception can fool they eye.  We can’t help but to draw comparisons between your photo and the images of the Loch Ness Monster or photos of UFOs.  Additionally the great film director Michelangelo Antonioni demonstrated in his ground breaking film Blow-Up that by enlarging a portion of a photograph in order to obsess on a detail, it is possible to see things that are not really there or to see what one wants to see while the image quality degrades.  We don’t know what you saw, but there does appear to be something white that is shaped like a butterfly in your photograph. 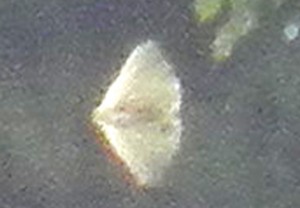