the other Michigan invader?
Location: Lansing, Michigan
October 5, 2011 7:11 pm
Hello,
Since early spring, I’ve seen a certain species of insect that I’ve never seen in MI. It’s some sort of beetle, loves windows, walks extremely slow and flies when necessary. There’s been a lot of talk regarding the Stink beetle but I don’t think this the same insect. I’ve seen big ones and little one and they are everywhere. What is it?
Signature: paw print 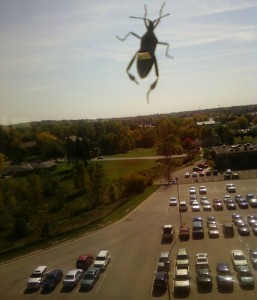 Dear paw print,
We love your photo that reminds us of a scene from a 1950s era science fiction film of giant bugs terrorizing the world.  The culprit is a Western Conifer Seed Bug, and though it is a Leaf Footed Bug that is not in the same family as the Stink Bugs, they are members of the same suborder Heteroptera.  The Western Conifer Seed Bug is native to the Pacific Northwest, but since the 1970s, it has been expanding its range to the east and in the early 21st millenium, it was accidentally introduced to Europe where it has naturalized.

Daniel,
You have solved my year-long mystery!
Thanks!
Amariliz