Scorpion like bug in New Mexico
Attached is a photo of a rather large and intimidating “bug”. It has claws like a scorpion, but not the curved tail with the stinger. Instead it has that long thin wiry tail. The tail actually looks like a long piece of wire of stiff hair. Can you tell us what it is? Is it poisonous or harmful to humans? Does it eat other insects? Thanks.
Monte and Mary Kern 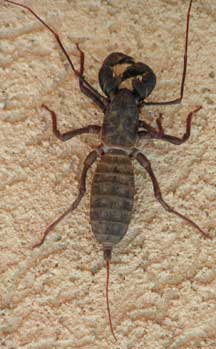 Hi Monte and Mary,
This is a harmless Whipscorpion, Mastigoproctus giganteus, also called a Giant Vinegaroon or Grampus. Legend has it that the bite of a Vinegaroon will cause the person to taste vinegar for weeks. Though this is untrue, BugGuide notes that “Although its tail in unable to sting, this creature can spray an acidic mist from a scent gland at the base of the tail when disturbed. The spray is 85% concentrated acetic acid/vinegar, hence the common name “Vinegaroon.” The heavy pinching mouthparts (modified pedipalps) can also inflict a painful bite. Although very unlikely to attack humans, it can certainly defend itself if provoked.” The Vinegaroon is a nocturnal predator with poor eyesight. It feeds on insects, other arthropods, and also, probably, small vertebrates like lizards.