Subject: Raising Bufferflies (we hope!)
Location: Halfmoon, NY (near Albany)
June 24, 2012 9:53 am
I came across your website while trying to figure out what type of caterpillars took over our rue. Last year we successfully raised and released over 30 Monarchs and this year have decided to rescue other caterpillars. We found these just after they hatched and thought they were Black Swallowtails as we had already found a large Black Swallowtail caterpillar (now in it’s chrysalis). As we watched them grow, we realized that we had been mistaken. Are these Giant Swallowtail caterpillars? We are hoping that we have enough rue to sustain our 6 new rescues!
Signature: Sarah 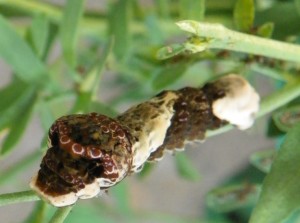 Hi Sarah,
We must commend you on your successful identification of this Giant Swallowtail Caterpillar and we wish you luck with the raising of it and its siblings to the butterfly stage.  Giant Swallowtails are a native species, but their range has expanded considerably and their numbers have increased in portions of the range where citrus is cultivated.  Though citrus is not native, the caterpillars adapted to feeding on the leaves of orange and other citrus trees, earning the caterpillars, which resemble bird droppings, the name Orange Dog.  We did locate a note on the All the Dirt on Gardening website that states:  “Rue gets special treatment in our garden is because it is the only plant we grow that is used by Giant Swallowtail butterflies to raise their caterpillars. Rue’s poisonous leaves make the caterpillars taste bitter to predators so they are left alone.”  We believe the website originates in Canada.

One Response to Giant Swallowtail Caterpillars in New York