Subject: What is this bug/caterpillar living on Mesquite Tree?
Location: North Texas
July 29, 2012 11:57 am
There’s multiple bugs of this kind all over a growing mesquite tree. I’m not sure if it’s a caterpillar or what. Whenever we touch it with a stick it has what looks to be two tongues that come out of its head. Then I start smelling something. I don’t know if that smell comes from the bug. It’s summer here in the Northern part of Texas.
Signature: Robert 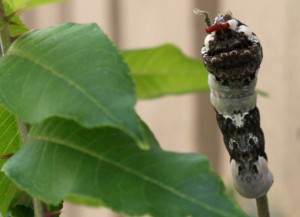