Hi Leigh,
Your observations are quite astute.  This is not a Dobsonfly.  It is a Giant Stonefly.  You may read more about Giant Stoneflies in the genus Pteronarcys, also known as Salmonflies, on Bugguide. 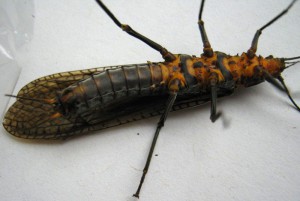