Subject: Found!
Location: Charlotte NC
May 28, 2017 8:08 am
Found this guy outside my front door! We moved him to a better area with some plants!
Signature: MW 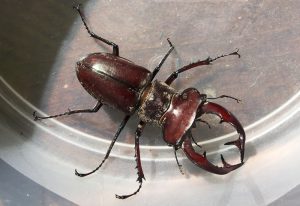 Dear MW,
This magnificent male Giant Stag Beetle or Elk Stag Beetle has some really impressive mandibles.  Stag Beetles pose no threat to humans and the males use their impressive mandibles to battle one another with the dominant male impressing the female so that he can pass on his genes.  According to BugGuide:  “There is some conservation concern about this species. The related Lucanus cervus, of Europe, is threatened.  considered by Arkansas to be a “Species of Greatest Conservation Need” (SGCN).”  If you had on a porch light, that might have attracted this guy to your front door.  Because of your kindness in relocating this gorgeous Giant Stag Beetle to a location where he would be safe, we are tagging this posting with the Bug Humanitarian Award. 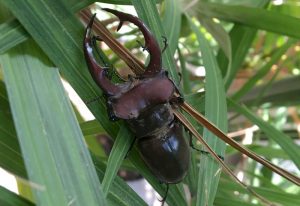