Subject: Moths
Location: Misiones, Argentina
September 25, 2012 8:13 pm
I found these two lovely Giant Silk Moths in Missiones, Argentina, and Sao Paulo state, Brazil,respectively, this past August. Could you tell me what they are? Thanks.
Signature: James Colborn 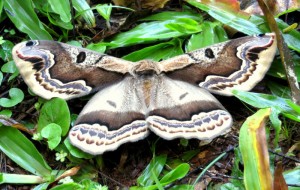 Hi James,
We believe we have correctly identified your second moth as Arsenura orbignyana.  Here are some images from the Fauna of Paraguay website for comparison.

Bill Oehlke makes a correction
Hi Daniel,
In 2010 Brechlin and Meister put forward a new name for the moths previously designated as Arsenura orbignyana from Misiones, Argentina.
They appear very similar to Arsenura orbignyana, but DNA analysis indicates they are a different species, and images of larvae also seem different. The moth in question, if from Misiones, Argentina,
would be Arsenura paraorbignyana which is reported from Misiones, Argentina and from Paraguay.
Brechlin and Meister also removed Arsenura angulatus  (Minas Gerais, Brazil) from synonymity with Arsenura orbignyana which it  now seems is a Bolivian species.
A forth very similar species, Arsenura xanthopus, flies in Paraguay and Southeastern Brazil. It has yellow legs, while legs of the other three similar species are dark brown. Xanthopus also  has a slightly produced forewing apex followed by a hollowed out area below the apex, while the other three species lack the produced forewing apex and have slightly convex outer margins.
We can definitely rule out xanthopus because of wing shape, and, based on the relatively wide and very dark intramural pm band of orbignyana and its location, it can also be ruled out.
Paraorbignyana and angulatus are very similar, and I would not want to rule either of them out as possibilities, but if the stated location is correct as Misiones, then paraorbignyana is most likely correct.
I am also looking at larger images of spread moths and am trying to compare them to the smaller image in question of a live moth. I do note the angulation of the forewing cell marks does seem a better match for
Paraorbignyana. Based on all of the above, I think it is paraorbignyana, but if James writes back and indicates this moth is from Brazil it would almost be a toss up between paraorbignyana and angulatus.
Bill Oehlke

Thanks Bill,
There was some confusion in the original submission, because James attached two files of two different Giant Silkmoths that were found in two different locations.  He has since clarified that the moth you identified as Rhescyntis pseudomartii, was photographed in Sao Paolo, Brazil, so we can deduce that this individual is from Misiones, Argentina.