Can you identify this big?
I came across this bug while on a mission trip to Bolivia, I cannot for the life of me remember what they called it. Can you please Identify it? I have attached it to this email
Laurne 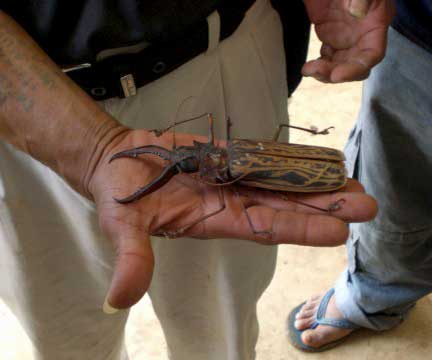 Hi Lauren,
This is a Giant Longhorn Beetle, Macrodontia cervicornis. We found information on Wikipedia that states: “Macrodontia cervicornis is the largest and best-known member of this genus of long-horned beetles, and this species is sometimes considered the second longest among all beetles, with known specimens exceeding 17 cm in length. A fair bit of this length, however, is due to the enormous jaws, from which it derives both of the names in its binomen; Macrodontia means ‘large tooth’, and cervicornis means ‘deer antler’. For that reason, it is generally excluded from consideration by purists who do not take the jaws, legs , or antennae of a beetle into account when determining length. This species is known from the rain forests of Colombia ,Peru ,Bolivia , the Guianas, and Brazil , but there are an additional seven described species in the genus, extending the overall range of the genus from Guatemala to Argentina .” 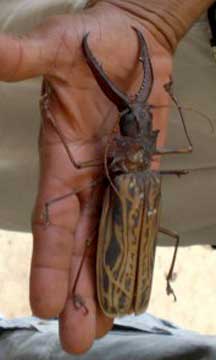 Update: (07/24/2007) Macrodontia [the grubs] are a delicacy
Hi Daniel,
Impressive images of that beetle. There’s evidence that these guys were once meals in the Amazonian rain forest; a desirable serving not only of protein and vitamins but of pleasing and energy-giving fats. While that still might be true, I have a feeling that these days someone finding a grub in the jungle would be likelier to raise it to adulthood and sell it as a specimen than eat it. Which is kind of sad, really. Best,
Dave
www.slshrimp.com