Giant House Spider from the UK

Subject: My new pet spider. What is he (or she)?
Location: Epsom, England, UK
September 18, 2015 5:47 am
I live in the UK and this little fella or gal has been popping up at various places around my home for the past two weeks. Would love to know what type of spider it is.
Thanks
Signature: Joe, UK 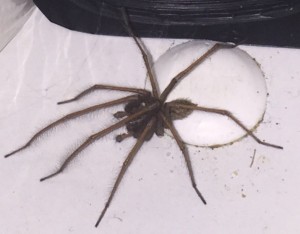 Dear Joe,
We identified your “pet” as a Giant House Spider, Tegenaria gigantea, and according to Nature Spot:  “Females can reach 18 mm in length, with males having a slightly smaller body at around 12 mm to 15 mm in length. The female leg span is typically around 45 mm. The leg span of the male is highly variable, with spans between 25 mm to 75 mm being common. The Giant House-spider has the same colouration as the Domestic House-spider; it has earthy tones of brown and muddy red or yellow and a pattern of various sooty markings. They also have conspicuously hairy legs and abdomen.”  According to UK Safari:  “They become more noticeable in autumn, which is their mating season.  The males are often seen scuttling across a room or falling into bath tubs as they move around in search of a female.  The males have longer legs than the females, while the females have broader abdomens than the males.”