Subject: A bug
Location: High Wycombe bucks GB
April 30, 2017 6:13 am
I have thousands of bugs in an area of my garden suddenly arrived do not seem to fly located under a pine tree all over tree house and adjacent shed .Body half a centimetre long plus legs .
Signature: Dianne Sutton 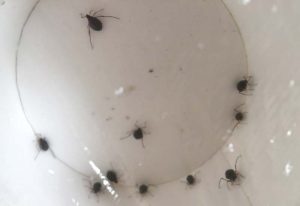 Dear Dianne,
These are Giant Conifer Aphids in the genus Cinara, and we needed to verify that they are present in Great Britain.  According to Influential Points:  “Autumn is not often regarded as a great time for insect hunting but, for aphidologists, it can be really good. Many conifer aphid populations peak in autumn, especially Cinara aphids. These are unusually large with long piercing mouthparts for piercing the bark of large trees. Many have a very limited host-range, often just one tree genus. Britain has 3 native conifers, thus few ‘native’ Cinara species. But in the last few hundred years many species were introduced, and some became naturalized. Following which we now have at least 25 Cinara species.”  According to BugGuide:  “Tends to form colonies on individual trees. They secrete honeydew, which is eaten by ants and wasps and provides the substrate for sooty mold fungus. May cause some stunting or even death on small or already-stressed hosts, but generally not a serious threat.  They are, however, a problem for Christmas tree growers: customers don’t like large, conspicuous aphids in their homes, especially since they tend to abandon the tree as it starts to dry out.”  Most of our postings of Giant Conifer Aphids are a result of Christmas tree infestations.

Thank you very much for your prompt reply how do I get rid of them?

We do not provide extermination advice.