The publicist at Penguin/Perigee requested that Daniel make a video to stir up interest in radio and television appearances prior to the release of The Curious World of Bugs.  Here is a simple home video of Daniel in the tomato patch:

Though a Tomato Bug, which is Grandma Nanowsky’s name for either a Tomato Hornworm or a Tobacco Hornworm, could not be located at the time the video was shot, there is nonetheless some helpful information contained in the video on these large green caterpillars that feed on the leaves of tomato and related plants.

Update
August 18, 2010
There has been no progress on the oven mitts, but I do have the germ of an idea for the next book.  Sadly, I wrote so much in The Curious World of Bugs that there was no room for one of the chapters in the original pitch.  What’s That Garden Bug?  Well, today while posting the Milkweed Meadow, I wrote the beginning of the next book.

What’s That Bug in the Tomato Patch???
“Could that be a new book title?  The Milkweed Meadow or Goldenrod Forest would be much more fascinating books.  Or, I could just stay close to home and write Black Mustard and the Camino Real and its thriving Spider and Insect population in Elyria Canyon.”  I actually think I need to write the Garden Insect Book.

Get the Bugman on Martha Stewart
June 24, 2010
I have been working diligently with my editor Maria at Penguin/Perigee regarding my book, The Curious World of Bugs, which is due out in October.  Now I have been assigned a publicist who will be targeting various publications and radio and television shows for potential interviews, appearances and reviews.  I have gotten a Bee in my Bonnet regarding an appearance on Martha Stewart, and I am bound and determined to do my best to get Martha to notice me.  Of all the television shows, this seems like the best fit for my book.  Though we have never conducted a user profile of our visitors to What’s That Bug?, homemakers, who also comprise Martha’s target audience, make up a large percentage of the website traffic.  Somehow, I think that a personal touch will be required to get Martha Stewart to notice me amidst the deluge of appearance requests her staff must field daily.  To that end, I am designing a pair of oven mitts, making them and then hand quilting them as a gift to Martha. 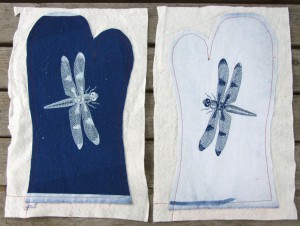 The image is of a vintage drawing of a dragonfly that is one of the art illustrations in the book, and I have rendered it onto canvas in both a positive and negative form, utilizing the photography techniques I teach to my students in the Creative Photo-Vision (Photo 22) class I teach at Los Angeles City College.  This cyanotype process dates back to the 19th Century, and interest in the process is getting a Renaissance among photographers.  Please let us know if you would watch the Bugman on Martha Stewart by posting a comment.
Daniel Marlos, AKA The Bugman
P.S. to Martha:  I make the best pirohi (the Ukrainian version of her favorite Polish dish called pierogi) west of the Mississippi River based on my Grandma’s recipe. 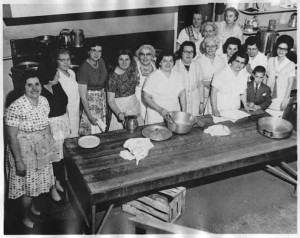 Here is a photo of a young Bugman (second from right), next to grandma (on MY right) in the hall of Holy Trinity Ukrainian Catholic Church where the best Pirohi in Youngstown Ohio are still made every Thursday and Friday between September and June.

Comment:
Bugman on Martha Stewart
November 9, 2010 11:22 am
Hi there!  I had some trouble logging in, my computer is goofed up at the momeht so i’m borrowing my daughter’s computer and email address.   I wanted to say I would MOST DEFINITELY watch Bugman on Martha, and I am a homemaker too!  I would really like those oven mitts as well!  Will you be marketing some?  I think you should, they are adorable!!  Have loved your site for years.  Take care, Michelle Nash, formerly of St. Charles, IL – now in Rolla, Missouri 🙂
Signature: Michelle

3 thoughts on “Get the Bugman on Martha Stewart”