pandora sphinx moth??? Dear Bugman,
My 7 year old son Alex loves your site! We are always reviewing the pictures to find caterpillars. My son found this caterpillar on a vine on his school playground and brought it home when it was a baby. He named it “Spot” because of the spots. Now it’s gotten huge, molted off his tail and doesn’t really have spots anymore. We looked at your site and are guessing it is a Pandora Sphinx Moth based on the pictures. Can you confirm this for us?
Thank you!
Alex’s Mom 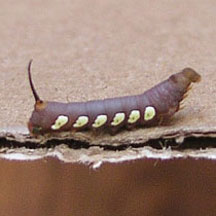 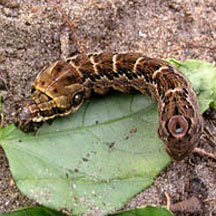 Dear Alex and Alex’s Mom,
We probably would have agreed with you based on the earlier photo as there are not always photos available of early caterpillar instars and often quite a physical change occurs as they molt. This is not a Pandora Sphinx Caterpillar, but a member of the same genus, the Gaudy Sphinx, Eumorpha labrusca. The larval food includes many vines according to Bill Oehlke: “In Florida larvae have been found on Possum Vine (Cissus sicyoides ). Cissus incisa, Cissus verticillata, Eupatorium odoratum, Ludwigia, Magnolia, Parthenocissus and Vitis vinifera are all reported hosts. “

Thank you sooo much! And you are so right, looking at other pics on the web now that I have the correct name. Also we are in Florida so that all makes sense! You the BUG MAN!