Moth caterpillar
The caterpillar in the attached photographs was on the boardwalk at Corkscrew Swamp Sanctuary in Naples, Florida, on August 26. There was no plant nearby that might have been a larval host. It was about 4 inches long and close to 1 inch in diameter. Great Batesian mimicry for a Water Moccasin, although considerably smaller. The spot on the top of the tail end (upper left in photo) would pulsate when the caterpillar was agitated — first by some ants, and then when it was moved to the side of the boardwalk so a passerby wouldn’t accidentally step on it. One person suggested an instar of the caterpillar for an Abbot’s Sphinx Moth. Can you identify? 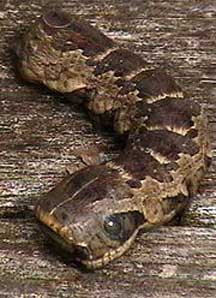 This is a Gaudy Sphinx Caterpillar, Eumorpha labruscae, and it is quite serpentine.