Subject: Fungus tarantula
Location: santa lucia, ecuador
December 23, 2012 6:49 pm
One of the most interesting finds in the cloud forest of Ecuador was a tarantula covered in an orange fungus. He looks better decorated than some of my neighbors lawns!
Signature: polymersn 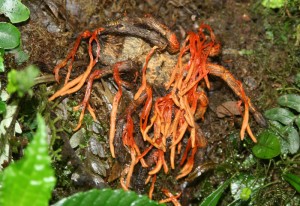 Dear polymersn,
Our website has numerous photos of Spiders covered in Fungus and Fungus also attacks flies and other insects, including this Lady Bug.  See BugGuide for some Fungus photos.  Your photo brings up countless questions and is fertile ground for allowing our vivid imaginations to run amok.  We wonder if this Tarantula was attacked by a fungus infection while it was still alive or if it died and was then consumed by the fungus.  We wonder if the former scenario was true, if the initial infection was something that might have affected the behavior of the Tarantula.  We hope you didn’t transport jungle fungus spores back to your home.  Some of this paranoia might have been fueled by an early childhood viewing of “Matango–Attack of the Mushroom People” though with all the biotourism currently en vogue, people are tramping organisms all over the planet at rates much faster than an natural range expansion would permit.  Thanks for sending us your awesome documentation.

Tachinid Fly emergence and possible Fungus from the UK