Subject: Unknown Unusual Spider
Location: Stoughton, WI
September 14, 2014 7:51 pm
We’ve got them too!
We have an 103 year old four square and found them in the basement cellar under the porch. We never go there, but we went down there when we found a chipmunk coming in and out from our porch foundation. We went down to flush the chipmunk out and fill in the hole when we discovered these fascinating creatures … albeit creepy!
We live just south of Madison, WI
We had never seen them before.
We have the same questions as everyone else.
Why is this fungus suddenly appearing?
And, is it harmful to humans?
Signature: Mariah

Dear Mariah,
These are probably the best images we have received of Cellar Spiders infested with a deadly fungus. 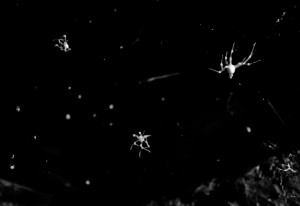 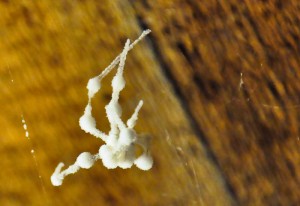 Additional feedback from commenter KennyMellon:
I just feel its more then coincidence that I’ve been in nearly 2000 basements in this little town, and when I’ve seen this Cave Crickets have always been present. And in complete reverse if no crickets, than normal spiders. I came across a basement the other day that had probably 50 or better all white coated spiders. Kinda eerie.

Perhaps there is a relationship between the humidity preferred by Cave Crickets and the humidity that encourages the growth of the fungus.