Subject: Thank you
Location: Vancouver Island, BC, Canada
August 15, 2012 3:46 pm
Hi to everyone at WTB,
I found out about your site recently, and I was deeply impressed by the kind and tolerant attitude you promote towards the beings we share the planet with! It’s heartening that in spite of the flak you probably get for the sentiment, you stick by it with such resolve.
Anyway, I thought I’d share a little (literally) bug rescue story that happened here around the end of July. We (my parents and I) are happy to have insects and spiders in our home, the latter having become of special interest since I started learning about spiders with the help of BugGuide. My grandparents feel the same way for the most part, but there are still a few things that irk them! We’d been getting complaints about swarms of tiny flying insects in their kitchen and one of their bathrooms. My mom even reported some tried to boldly go where few flies had gone before: up the noses of her and her co-workers as they ate during a meeting being held there! Needless to say, I got pretty curious after that.
It turned out that food was often left out longer than it should have been, which provided a fine environment for the 2.5mm fruit flies. There were lots, maybe more than a hundred, especially in the kitchen! I was saddened when I learned my grandparents had been killing them, so I offered to transport the bunch to our compost, where fruit flies thrive and are in turn valuable food for wasps, spiders, and other visitors.
I setup some containers which I baited with cherries and grapes, and I also put some fruit on the counter. I wanted to photograph the flies to show my grandparents what amazing creatures they are up close. I then left, and returned an hour later to find dozens of flies taking the bait. I quickly covered the containers, brought them to our compost, and released everyone. Within just a few such trips, most of the flies were gone, and I’m sure much happier in their new home.
The included photograph is of one of the flies feeding on a grape I left on the counter. Unfortunately I didn’t get a chance to shoot any of them from multiple angles. They came and went too fast. I believe they’re in the family Drosophilidae, but beyond that I don’t know. I’ve also posted a shot of a different individual to BugGuide here:
http://bugguide.net/node/view/681386
In closing, I should say that while I hope you enjoy the photograph and the story behind it, I’m not asking for an ID on the fly. I know you folks are very busy and don’t want to put any more on your plate. But it’s not everyday that one finds people that genuinely care about ”bugs”, so I wanted to make contact and thank you for running this site the way you do!
Signature: Kyron 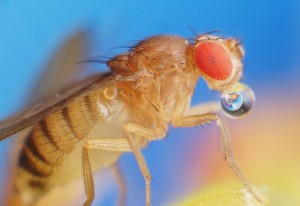 Hi Kyron,
This is one of the best letters we have received in quite some time, not only for the sentiment, but also for the depth of the detail that you went into for your explanation.   We also have Fruit Flies, or better Vinegar Flies in our kitchen.  They flock to the overripe bananas and to the garden fresh tomatoes that begin to turn before we have a chance to eat them.  They were tolerated until they discovered the vinegar culture we have been propagating, prompting us to cover the vinegar vat with a layer of thin cloth to keep the buggers out.  We believe your fly is in the genus Drosophila as it seems to match this image on BugGuide.  We don’t bother to relocate the Vinegar Flies.  We just eliminate the food source and they soon disperse or become prey to the spiders and other predators that are welcome in our home and office.  We do admit that there is a teeming population in our own compost pile and that the lizards are frequently found in the compost pile feeding on the flies that are attracted.  Thank you again for your support and we are tagging this posting with the Bug Humanitarian Award.  In closing, we want to compliment you on the excellent quality of your macro-photograph that is wonderfully detailed and puts our own attempts at macro-photography (we really need a better lens) to shame.

Kyron Responds
Great to hear from you, and thanks for finding the genus.  The fly sure
looks like the one you linked to.  I never knew they liked vinegar or
were called Vinegar Flies.  Very interesting!
We used to have some of these (or related I guess) in our kitchen too,
and we also let them be since their numbers never got very high.
They’ve since disappeared, except for the odd few that occasionally
follow us back from the compost.
I’m very glad you liked the shot and appreciate the compliment.  No
fancy equipment is needed though!  I used the kit (not a macro) lens
that came with my camera, mounted in reverse, as I do for most of my
bug shots nowadays.  One can get some high magnification with very
little expense by reversing lenses.