Is this a Kansas Leech
Location: Ninescah River , Cheney Kansas
July 10, 2011 1:01 pm
I found these things feeding on partial dead fish..I think they might be leeches but not sure..The fish was submerged in a shallow pool of water and was covered with them.
Signature: Chris Harris 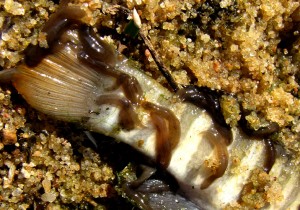 Hi Chris,
These are actually Flatworms known as Planaria.  Here is some information from the Planaria Homepage :  “They are a free-living, flat bodied, freshwater creatures that exhibit the remarkable ability to regenerate their lost body parts. It lives in lakes, streams, ponds, and other freshwater bodies The planarian is non-parasitic, and eats decaying meat.”  The website also includes details on keeping Planaria in captivity.  A single Planaria is known as a Planarian. 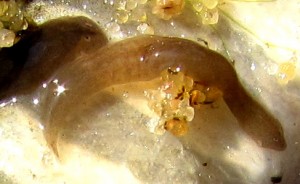 Request for specimens of Horsehair Worms

What appeared to be Sesame Seeds are likely Tapeworm Segments
Location: Kansas