Subject: Unidentified wasp?
Location: Southeastern Ohio
December 27, 2012 10:28 am
This pollinator appeared for only a few days, feeding on the sedum in my garden in southeastern Ohio. Have not been able to find a photo of this particular critter. Maybe not a wasp?
Signature: Toni Leland 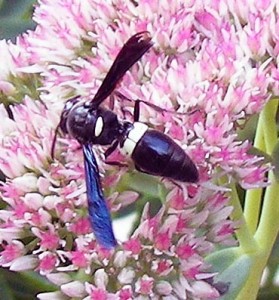 Dear Toni,
Since we just learned that nearly a foot of snow has been dumped on eastern Ohio, we suspect this is not a real recent photo.  If possible, can you let us know which month the sighting occurred?  This is a Four Toothed Mason Wasp, Monobia quardidens, and according to BugGuide it is “Usually seen in open habitats with flowers” just as your email and photo indicates.  BugGuide also notes it:  “Usually nests in wood borings, but sometimes burrows in dirt banks. Sometimes takes over abandoned nests of carpenter bees or ground bees, also Sceliphron (mud dauber) cells. Nest is provisioned with caterpillars, and cells of nest are separated by mud partitions.”

Daniel,
I am no longer in Ohio, thank goodness! Yes, lots of snow, and yes, this photo was taken in September of 2010.
Thanks very much for the ID. I do a lot of work with gardening sites and need to be as detailed as possible with my photos.
Regards,
Toni Leland
http://www.tonileland.com