Subject: I think this is a Silphidae
Location: Reese, MI
July 1, 2012 8:21 pm
I have an infestation of these bugs. By looking at the shell I think that these are from the Silphidae family. But all the information that I have found said that Silphidae do not bite but these do. They seem to come out at night and are attracted to apple cider vinager. Please help me identify these pests and come up with a way to keep them away from my deck!!!!
Thank you
Signature: Tireman2000 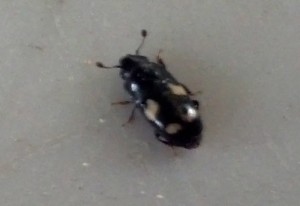 Dear Tireman2000,
Why ever do you keep a container of vinegar outside if it attracts these Four Spotted Sap Beetles which are also called Picnic Beetles or Beer Bugs.  We identified them first by doing a web search for vinegar beetles and we found a Sap Beetle on the Cape Beekeeping website.  The website author traps beetles in his bee hives by using mineral oil and cider vinegar, and he had a photo posted that was identified as a Sap Beetle that looked like your beetle.  Armed with that information, we found the Four Spotted Sap Beetle, Glischrochilus quadrisignatus, on BugGuide where it states they eat:  “various fermenting substances” and they are “attracted by the odour of fermenting fruits and vegetables; the adult beetles fly into beer or soft drinks at summer picnics.”  Again, please let us know what you are doing with the vinegar. 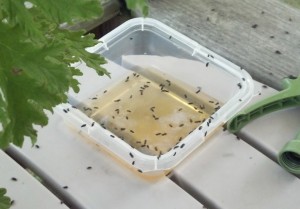 One Response to Four Spotted Sap Beetles attracted to Vinegar