Subject: huge caterpillar
Location: Racine, WI
August 6, 2012 3:49 pm
We found a huge caterpillar in southeastern Wisconsin. It was walking through the grass in a park. Its head is light green but its body is a reddish purple color. it has a white stripe going down its back with little slanted lines coming off of it. it has a tail and two sets of spikes on its body close to its head. What kind of caterpillar is it?
Signature: Katy 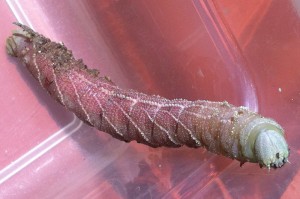 Hi Katy,
This is the caterpillar of the Elm Sphinx or Four Horned Sphinx.  Its pink coloration indicates that it is pre-pupal, meaning it has left its food source, possibly a nearby elm tree, though the caterpillars are also known to feed upon birch, basswood, black locust and cherry according to the Sphingidae of the Americas website.  It should soon metamorphose into a pupa without spinning a cocoon.