Subject: Large Blue
Location: Collard Hill, UK
June 26, 2015 12:26 pm
Hi bugman
I thought you might like this picture for your site. It is a Large Blue, Phengaris arion, that i photographed on 20th June at Collard Hill here in the UK. Large Blues have a really weird lifecycle, with the caterpillar spending most of its life in an ants nest feeding on ant grubs. Large Blues became extinct in the UK in 1979, but they have been reintroduced and have spread to over 20 sirtes in south west England.
Signature: Zoovolunteer 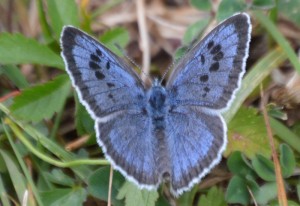 Dear Zoovolunteer,
Thanks so much for sending your images of a Large Blue, but especially for providing the information on the reintroduction of the Large Blue to the UK after their extinction there.  We would love to know the circumstances surrounding their extinction as well as where the introduced individuals originated.  According to the IUCN Red List site, the range is:  “From notthern [sic] Spain and eastwards to Italy, Greece and southern Scandinavia. Extinct in the United Kingdom due to the loss of the short turf habitat when rabbits died out during the myxamotosis crisis. Recently successfully reintroduced to a dozen or so sites in southwestern England.”  A different IUCN Red List page provides this information:  “This species occurs in Central Europe from north and central Spain via France to Denmark, south of Sweden and south of Finland and from the south of Italy and Greece to Siberia, Mongolia, China and Japan. Re-introduced successfully into a number of areas in southern England. 0-2,000 m. The global distribution area of the species is situated both within and outside Europe.” 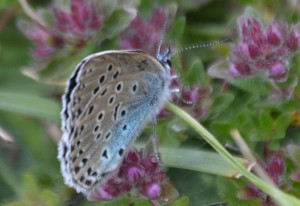 One Response to Formerly extinct Large Blue reintroduced to England