Subject: Black Hoverfly?
Location: East Coast of South Island, New Zealand
December 8, 2012 5:02 pm
Hi there,
This morning I noticed a large number of these black flies on my brassicas, the way they fly reminds me of hoverflies but they are a bit bigger, completely black and had a strange behavior of twisting their abdomens around.. do you know what they are?
Signature: Thanks! Bruce 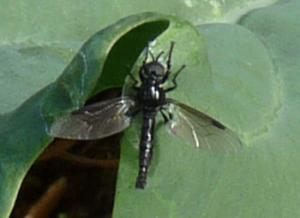 Hi Bruce,
We do not believe this is a Hover Fly.  We have not had any success finding any matching images online, but our best guess is that this might be a Snipe Fly in the family Rhagionidae.  You can see some examples of North American species on BugGuide and compare the similarities.

Thanks Daniel!
I think you’re right, the picture of the Golden Backed Snipe Fly on your site (wp-content/uploads/2011/06/golden_backed_snipe_fly_randy.jpg) looks exactly the same apart from the color and is showing the same curving abdomen behavior.
I see that the larvae for the Australian version is thought to live in rotted wood which makes sense as a large pile of woodchips had rotted into the ground over several years right next to where I saw this “hatching”, we are starting to see more Australian insects here (eg cluster flies) perhaps due to climate change?
The good news for my vegetable garden is that they’re predators 🙂
Cheers,
Bruce

We might eventually get a conclusive identification, and then we will update the posting.

Correction Courtesy of Karl
Hi Daniel and Bruce:
I think this actually may be a March Fly (Bibioniodae).  The wing posture seems a little unusual, at least to me, as they are usually kept folded over the back when at rest, but with a little searching I was able to find some very similar photos. A paper by Hardy (1952; Bibionidae of New Zealand [Diptera]) listed seven species for New Zealand in two genera (Philia x 6 and Bibio x 1). I could find no photos of the species described, but these photos of the European species Bibio marci, B. lanigerus and B. hortulanus look quite similar. I will add one more link (species and location not given) just because the photos are so pretty. In a more recent paper titled “Fauna of New Zealand; Number 20: Bibionidae (Insecta: Diptera)”, by Roy A. Harrison (1990) the author presents a taxonomic revision in which eight species are described and all have been placed in the genus Dilophus (here’s a non-NZ species). I suspect the species identification may be D. nigrostigmata based on appearance and location, but unfortunately the species all look quite similar and the posted photo is a bit fuzzy. Bruce, you may want to check out the Harrison paper and have a go at the identification yourself, especially if you can capture a sharper image. At the very least you may be able to confirm if it is a March Fly or not. Regards.  Karl

Thanks so much Karl.  March Flies actually crossed our mind because of the head.

Thank you!  I think you are probably quite right, the pictures look very similar..
The wing posture seems a little unusual, at least to me, as they are usually kept folded over the back when at rest,
Some had their wings closed, others open.. I just happened to photograph the individuals with the wings open.  I haven’t seen them again but if I do I’ll try to get a sharper photo.
Regards,
Bruce