bug eggs
Hi There
Please don’t be disturbed by this photo, as it isn’t poo, it’s actually some taco mince. ANYWAY it hadn’t been sitting in the pan for that long, but when i went back there were these 2 bunches of white egg things something had laid there. I had a foil cover over it, but obviously i didn’t cover it very well. But yeah, do you by any chance know what kind of bug eggs they are? Like are they maggot eggs? The only other bugs i have seen around the place are ants (though there were none around near the eggs or anything), spiders (only really little ones and some daddy long legs) and a praying mantis i saw earlier around but i doubt it was that. So i’m guessing it was the flies =S Sorry if i sound like a complete idiot but i am just really curious.
Donna 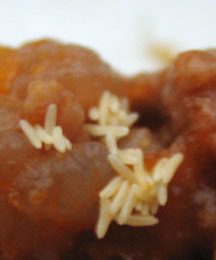 Hi Donna,
You might be ruining tacos for some of our readers. They look like Fly Eggs. They are consistant with Fly behavior. We are going on the record that they are probably Fly Eggs which will hatch into Maggots. Often we get letters from people who just don’t understand where swarms of flies come from in their clean homes. Imagine a scenario where you didn’t notice the eggs, threw the meat in the garbage, waited a few days to take it outside during a heat spell. The eggs would hatch and develop quickly. The maggots would crawl out of the garbage to pupate and then miraculously appear as a swarm of flies in a few more day, after all evidence was removed. Thanks for sending in the photo.