Earwig Not Locust Mites but Larval Water Mites on Dragonfly

The other is a beetle, I think it’s either a flea beetle or a case-bearing leaf beetle. It’s hind femora are enlarged, but it also has yellow patches on the elytra where most flea beetles have solid colored elytra.
Thanks again,
Dave 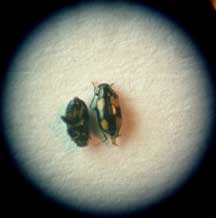 Hi Dave,
We agree that your beetle is a Flea Beetle, more specifically Phyllotreta bipustulata. They vary from 1.6 to 2.5 mm in length and are blackish with orange elytral spots. “The hind tibia of Phyllotreta” according to Lutz, “are not grooved on the outer edge, but slightly excavated near the tip and with a spur at the middle beneath.” A close relative that is similarly colored but with different markings is Phyllotreta vittata, which is common on cabbage.

Leaf Beetle from the UK

One Response to Flea Beetle