Subject:  Found this beauty in my hotel room!
Geographic location of the bug:  Phoenix
Date: 01/14/2019
Time: 07:35 PM EDT
Your letter to the bugman:  I was laying on my bed in my hotel room looking at the ceiling and suddenly realized I was staring at a pretty good sized spider. I called maintenance for a ladder and the guy showed up with a stick and a wad of duct tape inside out on the end of it. I said I wanted it captured alive so we could release it and he promptly handed me the ladder and a trash can. After some coaxing I managed to get it in the can and released it across the street. It’s January in Phoenix, cool weather (65 by day, 40s by night, but since it was inside that might not matter as much). As you can see it has stripes, and it was almost perfectly flat against the ceiling. My guess is fishing spider but wondering what you think. Thanks for your help in advance!
How you want your letter signed:  Erich Walsh 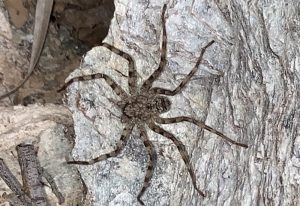 Dear Erich,
We have not awarded the Bug Humanitarian Award in some time, but discovering this Spider in a hotel room, calling maintenance and then capturing and releasing the Spider across the street certainly qualifies you as a bug humanitarian.  Your description that “it was almost perfectly flat against the ceiling” is acknowledged by the common name Flattie for Spiders in the family Selenopodidae, genus Selenops, which can be viewed on BugGuide.  According to BugGuide: “This genus is found throughout the tropics and subtropics worldwide and can be found in southern parts of the U.S. In Sarah Crews’ 2011 paper, it is noted that there are quite a few unsorted specimens from all over the southwest (so it is best not to take the following ranges as concrete).”  Confusing this Flattie for a Fishing Spider is understandable.

Daniel,
Thank you so much for the identification and the bug humanitarian award! That’s good fun and feels great. You deserve an award more than I do though for being a public advocate for nature and helping people be a part of that.
All the best!
Erich
3