worm or grub?
January 4, 2010
This bug was found while cutting down an oak tree in Pasco County in Florida. The cicle is the head and sections I guess the tail. From the photo it looks like it may have a stinger of sorts, but I was assured it did not. Any ideas?
Shaune
Pasco County, Fl. 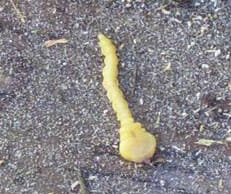 Dear Shaune,
The larva in your photo is a Flatheaded Borer in the family Buprestidae, known as the Metallic Wood Borers or Jewel Beetles.  We were uncertain of the species so we tried to search BugGuide for members of the family that bore in oaks, and we found your photo posted there, though there was no conclusive species identification.  We continued to search the web for potential species and on the Texas Beetle Information website, we found that the Red Legged Buprestis, Buprestis rufipes, bores in oaks.  According to BugGuide, it is found in Florida, so that might be your species, though BugGuide lists maple and birch as the host plants.  The positive identification of larvae is quite difficult.