Longhorn beetle?
Hello,
Just wondering if you could identify this little bugger for me. He’s a lot like most longhorn beetles, and he’s only about 3/4″ long on the body. But he has a strange orange speckling on his back, and he’s been popping up around SE Tucson. I haven’t been able to find one like him on-line, but maybe I’m not looking hard enough? Love the site! I’ve attached the picture. Thank you!
James 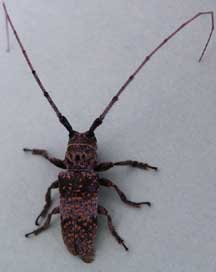 Hi James,
We thought this Cerambycid would be easier to identify. We have concluded it is in the subfamily Lamiinae, the Flat Faced Longhorns, but haven’t yet identified the species. We are going to request assistance from Eric Eaton. Here is Eric’s response: “Hi, Daniel: Thankfully, I actually ‘do’ recognize this cerambycid! It is known as the “mesquite girdler,” Oncideres rhodosticta. Females climb out on a mesquite twig and chew a deep groove around the diameter. Each female then lays an egg beyond the scar. The girdling kills the twig beyond the scar and the larval offspring bores in that dying wood. This, and other species of longhorned beetles, effectively prune trees and shrubs in this manner, literally shaping the forests and woodlands where they live. Eric”