nursery web spider vs. funnel web spider
You recently identified a large spider carrying a big egg sack to a funnel nest as a nursery web. I think it is a funnel web…because of the striped legs…and the funnel in a tree location..somewhere around Durham NC. I believe that the nursery web spiders have a drabber appearance…but i just thought you might want to check it out. Tell me if I am wrong because I find these spiders all the time, and I’d love to know exactly what it was. Best,
mary Sonis 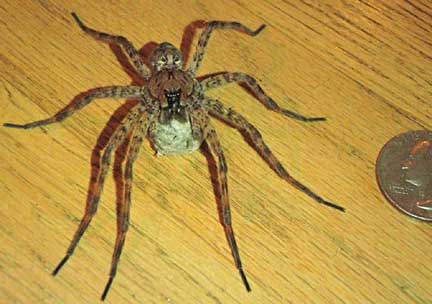 Followup: crittercam
This is my funnel web spider…I think…the egg sac she is carrying is the size of a shooter marble. her eggs hatched…that’s a lot of spiderlings she was near her mate in this funnel…note the striped legs on both … so what do you think it is? I’m not convinced this girl is a fishing spider By the way , I love your site! Best,
Mary Sonis 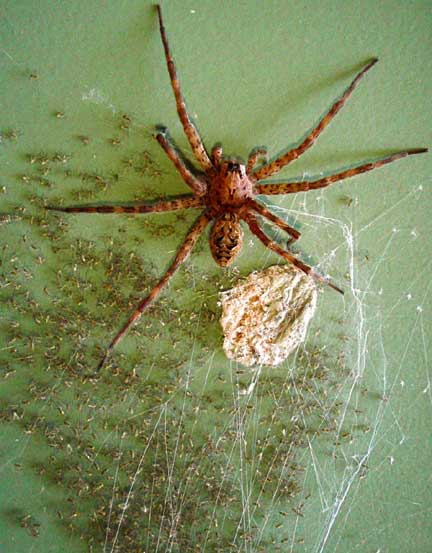 Hi Mary,
We were having some trouble making sense out of your multiple letters and referred back to the posting on our site that you cited from September 18, 2005 which is on our Spiders 5 page. Terry wrote: “Both were originally just outside the hole in a hollow tree” but he makes no mention of a web. Your letter included three of your own photos, two of the female with egg sac and hatchlings, and another photo. You wrote “she was near her mate in this funnel.” We are identifying your female spider with the egg sac and her hatchlings as a Dolomedes Fishing Spider, one of the Nursery Web Spiders. You can look at the photos posted to BugGuide and see that many have the striped legs you are using to identify Funnel Web Spiders. You can also see from the images on BugGuide, that Funnel Web Spiders in the family Agelenidae also have striped legs. They are not as big as the Dolomedes Fishing Spiders, and they spin funnel webs, unlike the hunting Dolomedes that don’t spin webs. Your mistake is in thinking that you have photos of one species when you have actually photographed two species. We are most thrilled with your photo of the female Dolomedes with her hatchlings. 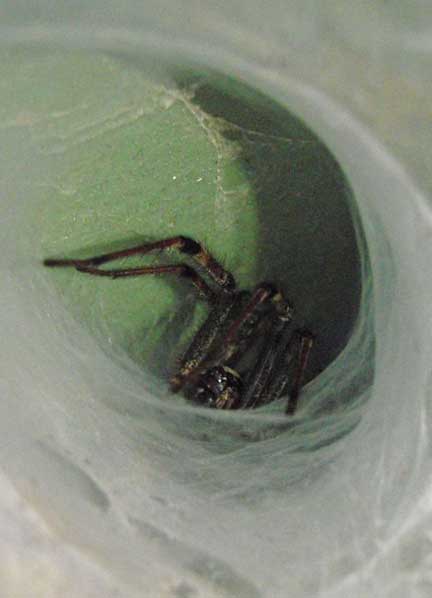 Dear Daniel,
Thank you for all the help with this. Ok, I have 2 species..I am curious why my Dolomedes would build her nursery web 6 inches from a funnel spider…and actually within the webbing of the funnel. I would think the funnel spider would think she had won the lottery as far as dinner is concerned! As far as I can see the funnel web has eaten none of our spiderlings…who are slowly dispersing along my back wall. i really appreciate all your effort on this…your site is just dynamite. Sincerely,
Mary Sonis

Followup: (08/14/2008)
Hi again Mary,
One more thought for you to ponder is that though many spiders are maternal and protective of their eggs and young, including Fishing Spiders, Wolf Spiders, and Lynx Spiders, we do not know of a single case where the female spider wants anything to do with her mate once she has mated, unless she wants to eat him like a Black Widow. Why the Fishing Spider would choose to deposit her spiderlings near a Funnel Web Spider is a very good question.

1 thought on “Fishing Spider with Egg Sac and Spiderlings, and Funnel Web Spider”